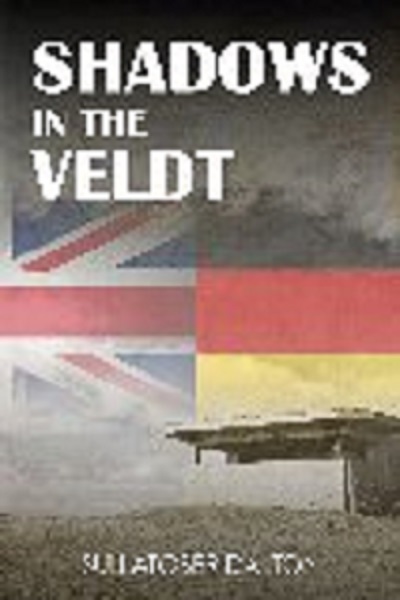 Title: Shadows in the Veldt

This follows on from King or Kaiser, part detective novel, part war story, including some of the comic moments that are part of any armed struggle. This is a WW1 story, full of the mirages and mystery of the South African veldt. Based on actual events that took place in the armed struggle between the Kaiser’s Afrikaans friends and Jan Smuts’ Empire Loyalists, the book moves across the land in the search for the leader of the rebellion. As the book opens, the German radio mast at Windhoek continues to send shipping news to Berlin but South Africa, who have agreed to deal with it for Winston Churchill, is still in the grip of the Five Shilling Rebellion.In late 1914, Koos Jacobs, alias Kruger, under suspicion of murder, takes on the identity of his dead friend Tom Clarke. The new Tom, in South Africa’s Army Intelligence under Phoxx, is sent to find and bring General Beyers, the rebellion’s leader, to South Africa’s Defence Minister, the wily Jannie Smuts, alive or dead. If dead, the ‘accident’ must not be traced to Smuts, even if that means Tom has an accident. It’s not easy and takes Tom from the Kalahari, north to the bushveldt and south to the plains of the Free State. It is civil war and from time to time vicious, but it is a war of movement and deception, sometimes even farce, and Tom soon finds he is chasing shadows in the veldt as he follows leads as to where Beyers could be. Flying one of the new aeroplanes is just one of the things Phoxx expects, you get there even if you crash. His new identity may give the new Tom a family to satisfy the army’s curiosity, but his new sister insists on coming to visit and with her comes a hangover from ‘Tom’s’ father’s days at Kimberley in the rumour of a hidden parcel of diamonds.